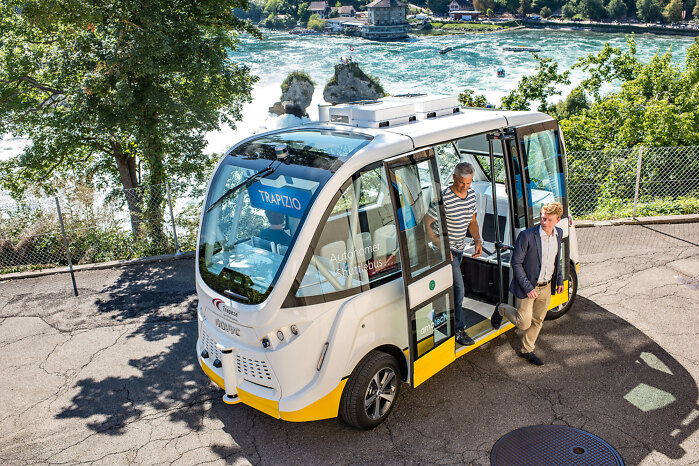 The line 12 of the Swiss Transit Lab

Line 12 was operated for around 1.5 years between 2018 and 2019. As the first autonomous public bus line in the canton of Schaffhausen, it provided an attractive link between the Rhine Falls and the center of Neuhausen am Rheinfall in terms of access to the first and last mile. It differed from other pilot projects in that it was fully integrated into the existing public transport network of the canton of Schaffhausen from the outset and thus shared the existing infrastructure.

The project was initiated, planned and implemented jointly by industry, the public sector and transport companies. Each partber shared their expertise and developed the project in the canton together with the population. The project was also accompanied scientifically by the ETH. The ETH acceptance study recorded and evaluated the integration of concerns and wishes from the population. 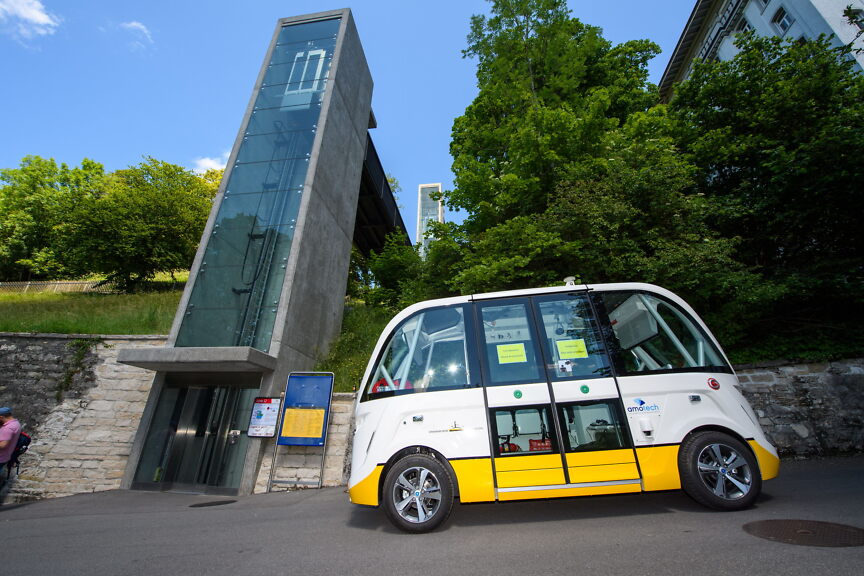 The self-driving bus at the Rhine Falls

The chosen route was challenging. Many tourists, narrow passages and traffic circles along the route. A special feature of the section is the 15% slope connecting the city to the Rhine basin. Another novelty was that the vehicle was used bidirectionally, i.e. it drove there and back without turning around. The experiences from this were very helpful to evaluate the possibilities but also the limits in the use of autonomous vehicles. 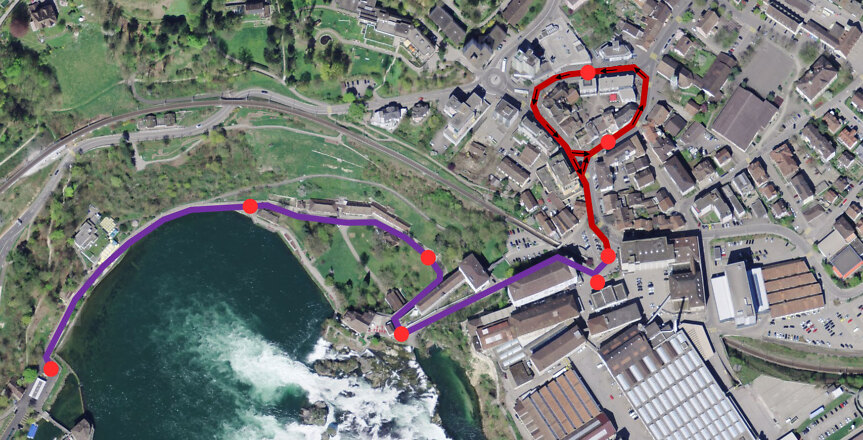 The shuttle operated for 1.5 years - from spring 2018 to fall 2019 - on the upper section of the route in the 30 km/h zone in mixed traffic between Industrieplatz and Neuhausen am Rheinfall Zentrum (red-colored section). There, the autonomous minibus served three stops, two of which were shared with conventional buses operated by Verkehrsbetriebe Schaffhausen VBSH. In June 2019, the route was extended to the Rhine Falls basin (purple colored route) with four additional stops. The red dots mark the stops. In its filnal phase the shuttle served the entire route with a total of seven stops. 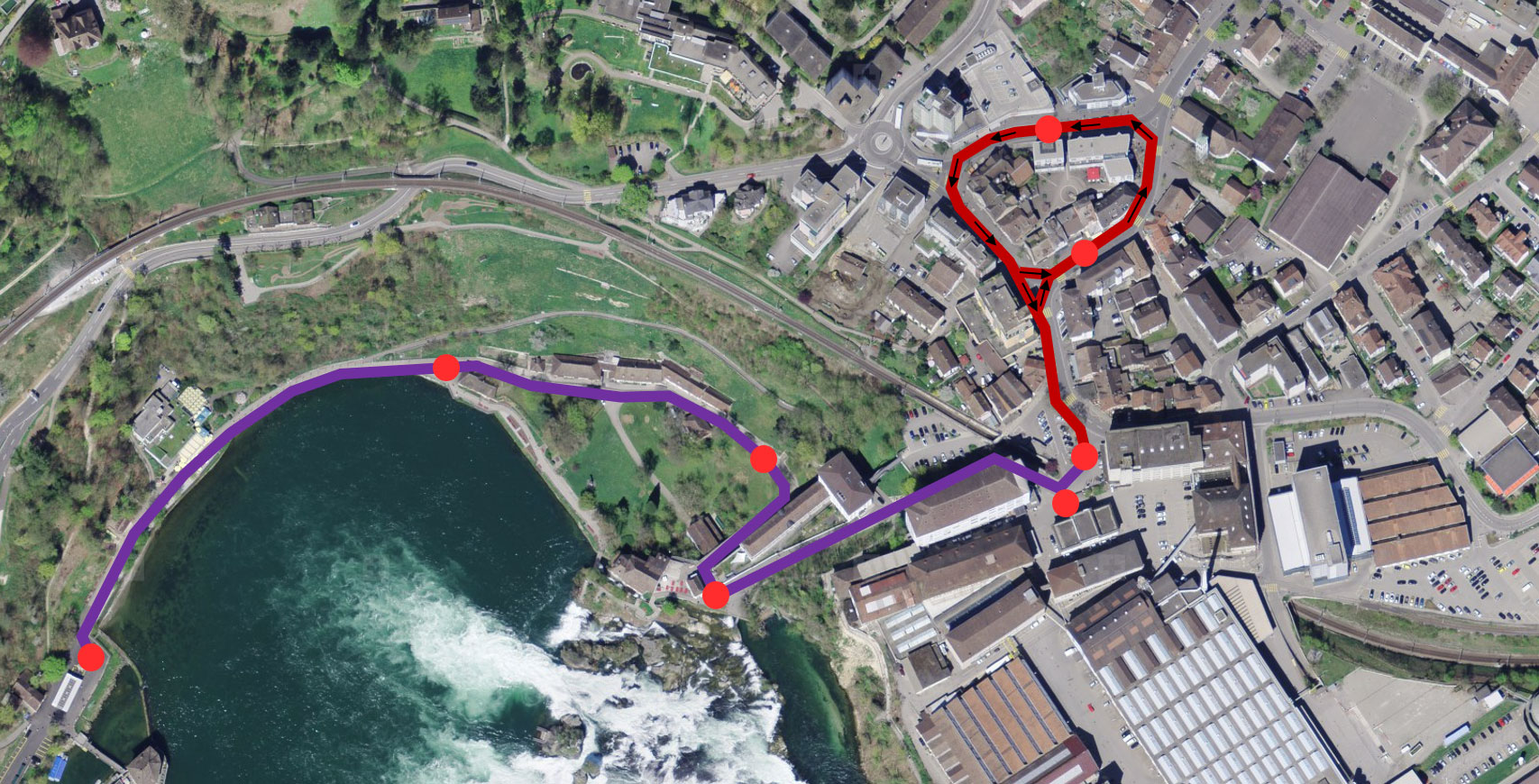 FAQ - Questions and answers about line 12

What could be learned from the operation of Line 12?

A variety of valuable experiences could be gained during the operation of the autonomous line 12. During the project duration of 1.5 years, more than 35,000 passengers were transported, most of whom gave very positive feedback. Line 12 was successfully integrated into the VBSH operational control system and was fully functional as a fleet vehicle on the first and last mile. The exchange of experience with other operators of autonomous lines worked well and produced exciting findings. However, due to the the technical immaturity of the chosen vehicle, alternative solutions had to be evaluated.

How could the population benefit from the project?

The project offered an extension to the existing public transport offer. In pilot operation, a route between Neuhausen center, the industrial district and to the Rhine Falls expanded the network with new destinations. Especially people with limited mobility were enabled to access the natural spectacle at the Rhine Falls in a different way.

The public transport operator VBSH were able to test autonomous mobility on routes that previously could not be operated economically. Overall, public transport in the canton and in the region gained attractiveness through the project.

Will there be other routes?

The Swiss Transit Lab is planning further routes with autonomous vehicles. Line 13 in the city of Schaffhausen, for example, is currently being planned and is scheduled to go into operation in 2022.

If you have any questions or concerns, please contact Swiss Transit Lab. Send us an email at info@swisstransitlab.com Thank you.

Trapeze Switzerland GmbH and Verkehrsbetriebe Schaffhausen VBSH decide to help shape the mobility of the future. Supported by the regional and location development promotion agency of the canton of Schaffhausen, they decide to conduct trials with autonomous shuttles.

Autonomous mobility at the Rhine Falls is presented to the media.

An application for the exceptional permit to operate in Neuhausen is handed over to authorities. At the same time, the organizational structure of the project is decided and the efforts are formalized under the umbrella of the Swiss Transit Lab.

The autonomous bus at the Rhine Falls is in operation between spring 2018 to fall 2019. More than 35,000 passengers used the bus during this time. 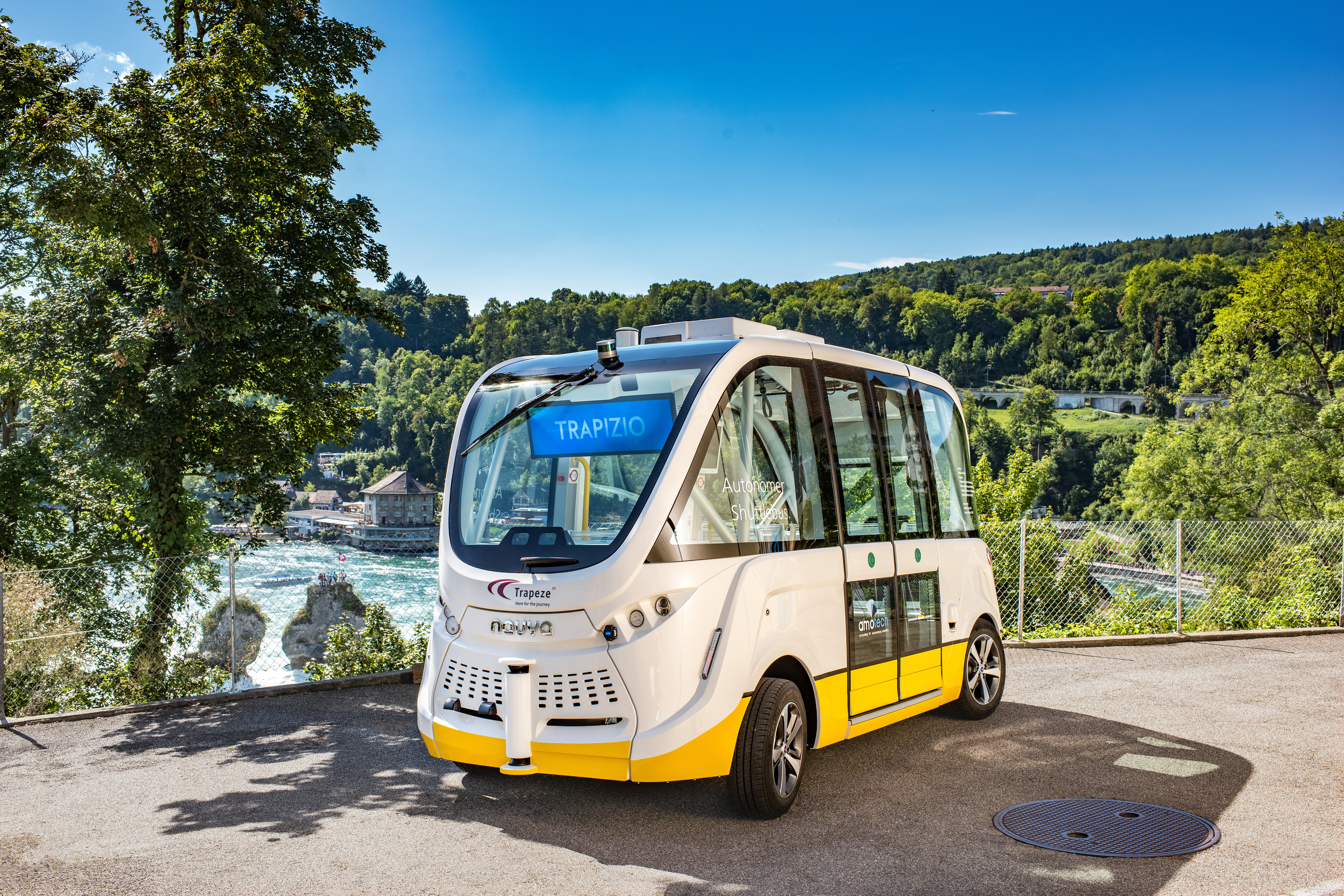 Vehicle in operation at the Rhine Falls 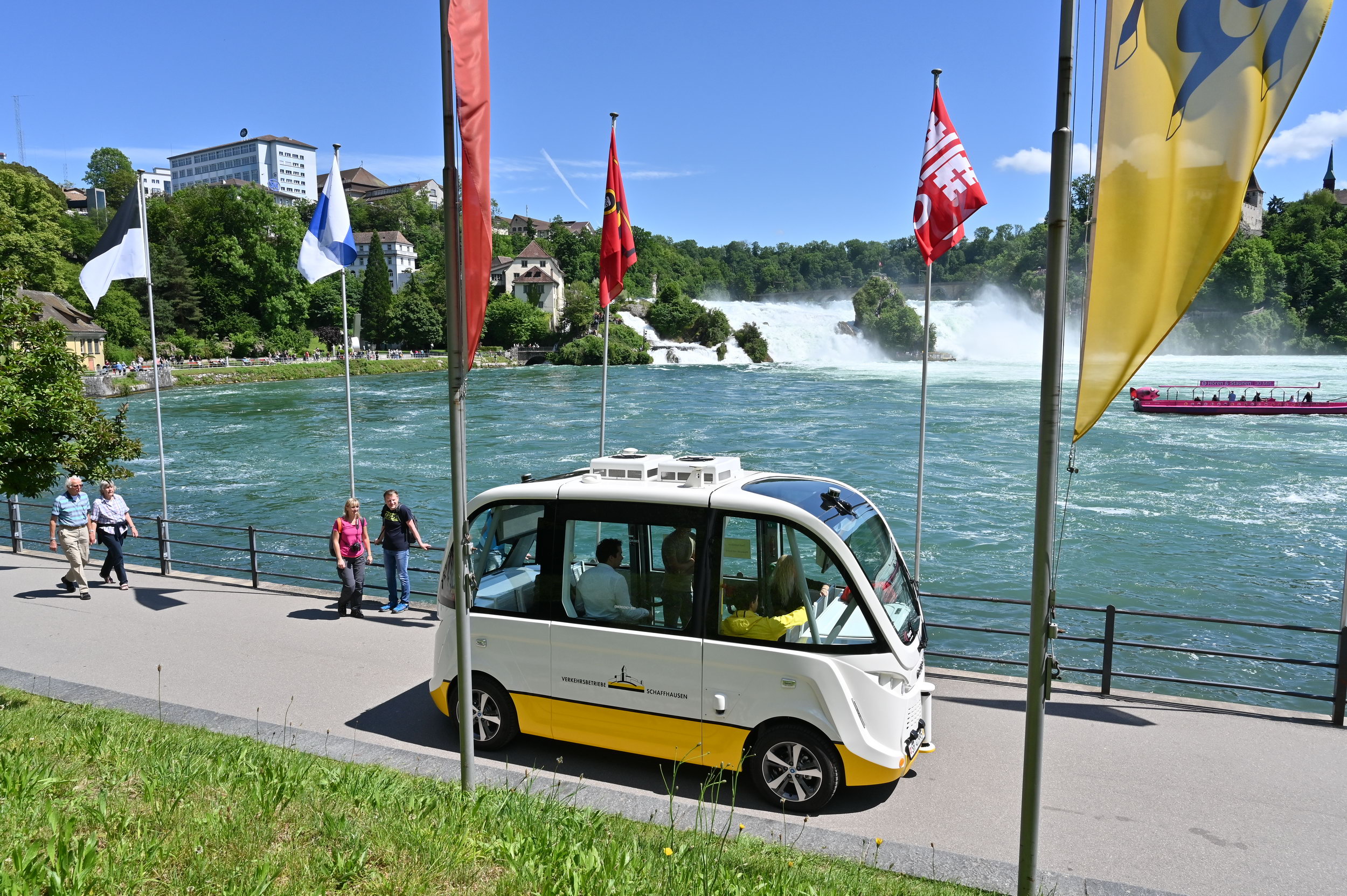 Vehicle at the stop 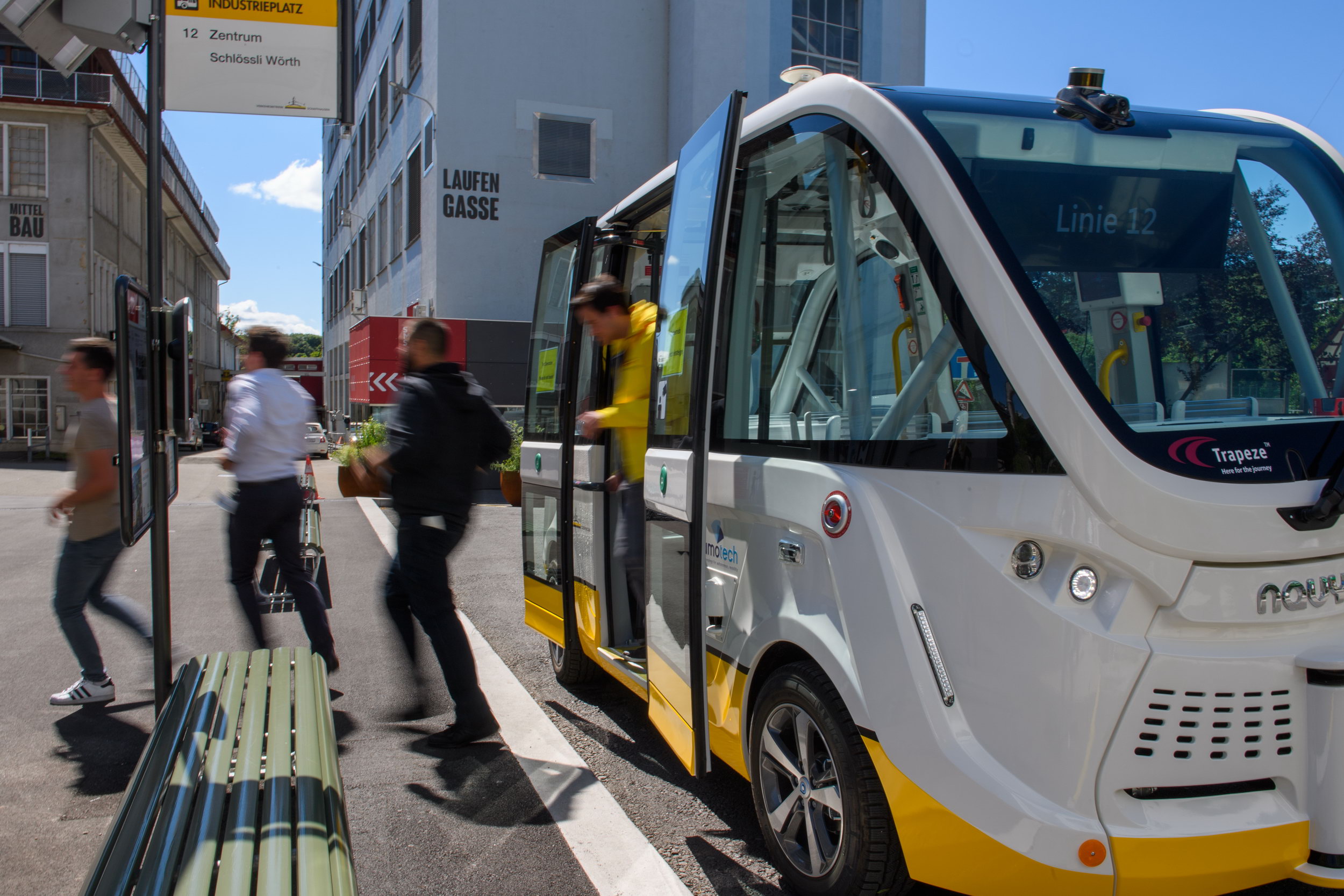 The partners of the Swiss Transit Lab

Thanks to our partners, we can realize our vision of future-oriented mobility. 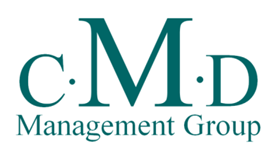